Following last week’s delivery from the Royal Mail, here’s the second batch of postcards to land on the mat.

The staff in our global holiday village are delightful, particularly Pedro, our mad barman. He services us with charm and generosity and rings his little bell every time he gets a tip. It’s like a royal wedding at Westminster Abbey when we’re around and the bigger the tip we give, the bigger the drink we get. As Pedro said to Liam:

And I’ll tell you one thing for nothing. As soon as I get home, I’m back on the tramadol.

We went tut Benidorm in January. It were great. We ‘ad beach to ourselves.

Me son’s got an apartment in Bulgaria.

Of course, we normally go to Goa, don’t we Jean? All-in for a tenner a day – and that includes two packs of fags and enough booze to sink the Ark Royal.

We’re just a short mince from the Yumbo Center, the largest of the many tacky shopping and entertainment centres dotted about Playa Del Ingles. As I wrote back in 2012 after our last trip…

The Yumbo Center is the throbbing epicentre of gay Canarian low-life. The Yumbo is a naff treat for all the senses, a crumbling multi-layered open air shopping and sex emporium. It started to fall apart as soon as it was built (some twenty five years ago). By day, it’s an over-sized pound shop patronised by ancient slow-lane Germans in busy shirts and socked sandals. But, at the stroke of midnight, the racks of tat are wheeled away, the garish bars throw open their doors and the entire place is transformed into a gaudy cacophonous neon-lit cess-pit of drunken debauchery.

It was one of my most popular posts ever. Can’t think why. Strangely, we’ve only ventured into the Yumbo Center once so far – and then only during the day to do a bit of shopping for that must-buy momento. The venues come and go but the place never really changes – apart from the newly installed lift for the mobility-challenged. It’s true, we did stop for a daiquiri or two – for old time’s sake and to survey the footfall. Our immediate neighbours were an over-waxed Franco-German gay couple with plucked brows, precision beards and perfect pecs. They could have been separated at birth. Must be like shagging a mirror. When they weren’t fiddling with their iPhones (to check Grindr, presumably), they communicated in Globalish*. Our barman was pretty. And pretty useless. Just like every gay bar around the world.

Mercifully, the heatwave has broken. I’d started to lose the plot and I was a hair’s breath away from garrotting the leathery old early birds who always get the brollies. With plunged temperatures, Liam bundled me out of the apartmentos for an excursion to Puerto de Mogán, a marina resort on the south-west coast of the island. We went by public transport, by far the easiest way to get around. Naturally, the bus stop was like a multi-national rugby scrum. You’d think people were fleeing a war zone. Why do we Brits bother queueing?

Set on a steep-sided valley, Puerto de Mogán is built in faux Spanish colonial style and very pretty it is too. But the epithet ‘Venice of the Canaries’ is over-egging the pudding a bit. There’s just the one ‘canal’ – more of a creek really. Still, we ate tapas in a lovely marinaside restaurant followed by coffee and cake in an inviting backstreet bakery. The port’s like a mini version of Bodrum in look and feel, particularly with the dripping, multi-coloured bougainvillea. Sadly, the relaxed ambience was marred by a gang of pissed-up Geordies stalking the streets and waving empty Peroni bottles. My dad was a Geordie. He’d be spinning in his urn. 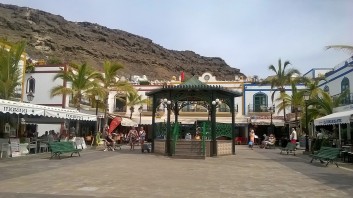 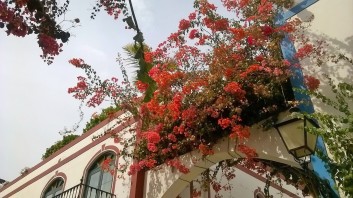 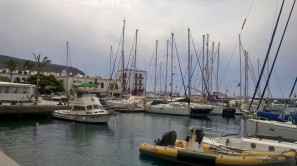 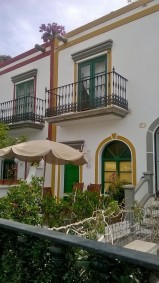 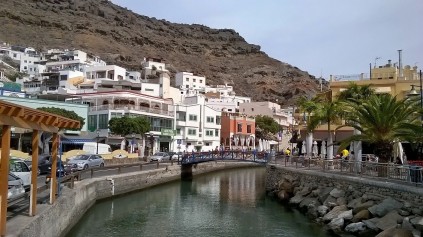 All in all, it’s been a splendid week, with batteries, scent and cigs (for my mother) recharged. Next trip: back to Bodrum for the wedding of the year. Now that really is something to write home about.

*Globalish is the cut-down version of English used by air traffic controllers, international conferences and dating apps which is totally lacking in elegance, colour, nuance or wit.

Not much of the news coming out of Turkey these days is positive – refugees, bombs, riots, censorship and the usual rhetoric from the imperious Erdoğan. The western media do so love to stoke up a drama. You could be forgiven for thinking the place is falling apart. Well, it isn’t. But the headlines are putting visitors off. According to some estimates, bookings by Brits are down by over a third. A glance at the travel agent’s window reveals the bargains to be had, reflecting a tourist trade going through lean times. It would be foolish to suggest there aren’t any problems but Turkey remains one of the safest holiday destinations anywhere.

It’s been four years since we returned from Turkey and we’re content with our lot in old Norwich Town. The slowish pace of life suits us well. But, we’re often nostalgic for our easy come, easy go days of Bodrum. During one particularly wistful afternoon in the boozer, Liam and I took a drunken stagger down memory lane. Over the last few years I’ve scribbled a word or two about my best bits of Turkey and I’ve even won writing competitions with my musings. So to cure me of my melancholy, Liam suggested I put them all together. So that’s what I’ve done. And very cathartic it was too. I’ve called it Postcards from the Ege, Jack Scott’s Turkey Trail. 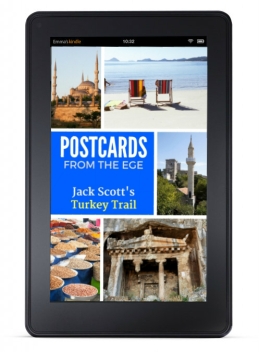 With such an immense political and cultural heritage, it’s no surprise kaleidoscopic Turkey is such a feast – a prime cut of authenticity, seasoned by the West and spiced by the East. Jack Scott knows a thing or two about the country. He lived there for years and travelled widely – to Istanbul and along its south-western shores from Izmir to Alanya. In Postcards from the Ege, Scott shares some of his must-sees and personal highlights. Follow Scott’s trail. Come to Turkey.

The e-book has just been published on Kindle by Springtime Books. It’s a steal at a couple of quid and if it encourages people to sample the extraordinary land we used to call home then that’s all to the good.

I’ve been invited onto the Stephen Bumfrey Entertainment Show on BBC Radio Norfolk to have a natter about my book, Turkey Street.  According to the BBC radio website, the marvellous Stephen ‘mingles with the stars of stage and screen on his afternoon show.’ The only time I’ve ever treaded the boards was as Snug the Joiner cum Lion in a school production of A Midsummer Night’s Dream. I roared a lot and fluffed my lines. And as for my screen career, well, we’d best draw a veil over the sex tape. So I feel a bit of a fraud. Help!

Writing the closing scenes of my new book brought good and not so good memories flooding back. They came in erratic waves, like the mad traffic that used to vibrate past our stone cottage in Bodrum. Our time in Turkey was the best of times, a four year white knuckle ride that frequently left us breathless. Like all adventures, it wasn’t without its challenges. Language, culture, resentment, home sickness, red-tape, isolation, plunging interest rates, political uncertainty, the dreadful expat rat pack – these were just a few of my least favourite things. They made me sad and from time to time, they queered our pitch. I’m glad to say we batted most of them off. Like seasoned old pros, we settled down to a life of wanton self-indulgence in an emigrey bubble of our own making, for a while at least. The trouble is, all bubbles burst sooner or later and now we’re back on planet Earth. We’re grown-ups again, albeit a little older, a little wiser and with completely different priorities.

I’ve often been asked what we would do differently if we had our time over again. The answer is very little. Before we stepped off the treadmill and abandoned the long grey days, Liam became my very own forensic researcher. “Dib, dib, dib, dob, dob, dob,” as the Scouts say and, just like the Scouts, “Be Prepared,” was Liam’s mantra. Even so, despite extensive preparation, we still got tripped up. You see, whether you move to a foreign land for the filthy lucre, the thrill of discovery or just to put your feet up and wait for the Grim Reaper’s call, something unexpected will pull the cultural rug from under you. Trust me. It will happen whether you like it or not so best get used to the idea. That’s not to say you should just jump in the deep end without a rubber ring, that would be daft. No, it makes sense to to avoid that painful belly-flop. Do your homework and find out as much as you can from the people who have been there, done that and bought all the fake tee-shirts. In the long run, it will save you a lot of heartache. And if you like to take your advice in handy sound bites, check out HiFX Expat Tip page, from those in the know. There’s even a little tit-bit in there from me. 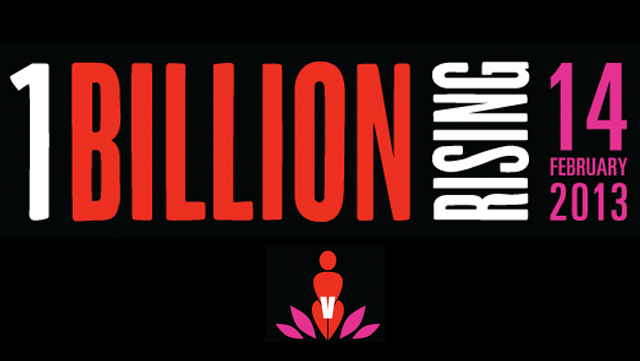 ‘One Billion Rising’ is a global campaign to eradicate violence towards women and girls. Why One Billion Rising? Well, it’s estimated that one third of all women on the planet will experience violence at some point in their lifetime. It’s a staggering, almost incomprehensible statistic that makes the brain hurt. Tomorrow is ‘V’ day (Victory, Valentine and Vagina) and events are being held all over the world. Everyone is invited to shake their booties in a glorious dance fest of global proportions to call a musical halt to the horrifying levels of abuse. Let’s face it, knocking women about (and much, much worse besides) just ain’t clever – never was, never will be.

The Norfolk broads are doing their bit with ‘Norwich Rising’ at the Forum at 1pm and the ladies of Turkey are getting in on the act in Fethiye, Göcek, Izmir, Izmit, Istanbul and our old stomping ground, Bodrum. So to my Bodrum Belles, Gümbet Gals and Bitez Babes, get your backsides down to the harbour for a bit of bump and grind. Gather from midday for the dress rehearsal and wear something pretty in pink. We want to see those tushes twirling in perfect harmony by the 1pm kickoff. I have my spies.