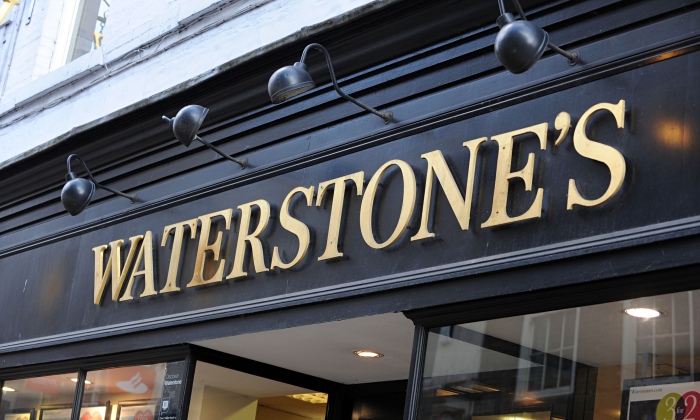 Waterstone’s is the UK’s second biggest bricks and mortar bookseller (after the ubiquitous WH Smith’s) and its stores are great places to shelter from the rain and thumb through a title or two. I would hate to see them disappear from the high street just because of the relentless march of the on-line retailer. ‘If you can’t beat them, join them,’ may be a well-worn adage but it made perfect commercial sense for Waterstone’s to launch its own on-line offer a few years ago.

Much has been said about the phenomenal growth of Amazon and its sharp practices, not to mention its questionable (but quite legal) tax avoidance shenanigans. But you can’t fault their business acumen. If you view an out of stock item, you get this message:

Temporarily out of stock, order now and we’ll deliver when available

Contrast this with the message from Waterstone’s:

Not in our warehouse. We can order it, but could take up to 3 weeks 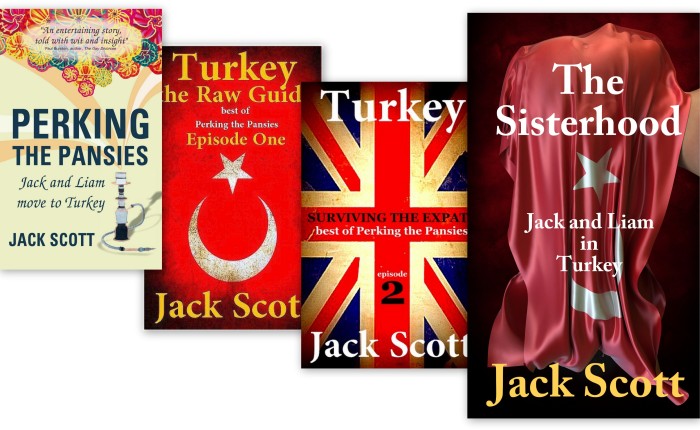 The sequel to Perking the Pansies to tie up the fraying loose ends and bring our Anatolian journey to its crashing conclusion is coming along very nicely. Expect a few surprises. I have a working title of  ‘The Sisterhood,’ so this may give a little clue about the main theme.  In the meantime, a gentle plug for the books already on the virtual and actual shelves. Hey, a boy’s got to sell his soul to bring home the bacon. 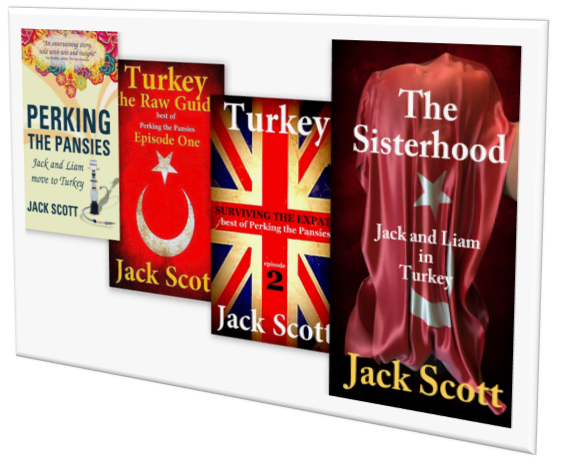 The books are widely available in multiple formats. And if you buy direct from me, I get to keep the lion’s share of the take. For more information, check my website.

This writing lark has provided an unexpected bonus: I get asked to review books and they are sent to me for free. It’s mostly (but not always) a fun and diverting pastime. It also forces me away from the keyboard: I tend to read a few chapters at a time over an Americano in a local coffee shop. Now that spring is upon us (here’s hoping) and thoughts turn to a welcome break in a faraway land, you might be looking for the perfect holiday read. You could do a lot worse than these titles. You’ll be relieved to know that I’m not plugging my own work this time.

A chance meeting, a stolen glance, a skipped beat and the birth of a fine romance? Well, not exactly. There are no roses round the door in this gripping trans-Atlantic tryst of passion, intrigue, obsession, and deception. Sleeping People Lie is a splendid affair of the fixated heart with a bitter-chocolate twist. A box of Cadbury’s Milk Tray it ain’t. Where will it end? That would be giving the game away. Jae De Wylde’s second book is a corker (and her first book was pretty good too). The lady’s going far. Fabulous! 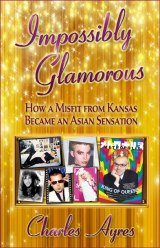 Charles Ayres has a white knuckle tale to tell and he tells it with wit and panache in his romping autobiography, ‘Impossibly Glamorous.’ From the moment Charles dropped out of the womb he was different and being different in Eighties Mid-West USA was no walk in the prairie. The MENSA-brained boy from Kansas country found the Bible Belt wanting and went in search of eastern spice. Draped in a second-hand fake fur he used like a comfort blanket, Charles turned on his heels, hitched up his skirt, rode out of town and lay down his sequined saddle bag in the Land of the Rising Sun. It was not all glitter and glitz. Much of the time it was a broken-hearted obstacle course of depression and hand-to-mouth living. By his own admission, Charles has not been the best judge of matters of the heart and he brushes aside one red flag after another with a camp, dismissive wave. Fortunately, there’s an eclectic cast of extras to haul him up from the emotional abyss, including my personal favourites, “the Ladies of the Commonweath.” MTV during its glory days provides a vibrant soundtrack to the adventures and mishaps. As a Tokyo radio translator and TV personality, a dazzling pantheon of stars passed through his hands and Charles deliciously name-drops his way through his extraordinary saga. In the end, though, a diet of oriental fame brought little fortune and there’s no glamour in penury. Through it all, Charles’ humour, humanity, candour, unquenchable thirst for life and rare insight into the slings and arrows, cut through the crap like a blazing shooting star. Charles Ayres is impossibly glamorous and can light up my party anytime. 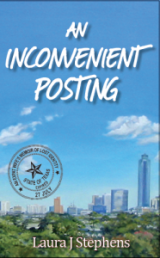 When husband, David, received the job offer of a lifetime to head up his company’s office in Houston, Texas, it could not have come at a worse time for Laura. Their young children were settled and thriving in the home that she cherished, she was close to launching her own career as a counsellor and her parents had moved nearby to enable them to spend quality time with their grandchildren while they still could. To say Laura was conflicted would be a sweeping understatement. But, her love and loyalty for her high flying husband meant that she was determined to do the right thing even when her heart was screaming “no”. Besides, exchanging the grey and dripping skies of England for the endless horizons of Texas had its attractions. How bad could it be? ‘An Inconvenient Posting’ is an agonisingly candid and raw account of loss and transition. Dark and broody but revelational and comic at the same time, this book will resonate with anyone who has found themselves in the wrong place at the wrong time. Did Laura live the American dream? You best read the book to find out. 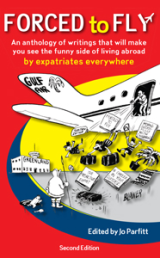 I read the first publication of `Forced to Fly’ and thoroughly enjoyed it. As well as 20 brand new anecdotes from a range of expat writers (including me) and bloggers, this second edition also includes a thoughtful new chapter on emotional resilience, a hot topic these transient days. This funny and forceful anthology is the definitive must-read reference for all novice and experienced expats. Slip it into your hand luggage as you board your flight to paradise. Forearmed is forewarned. 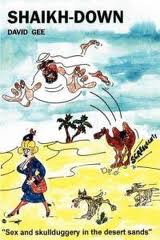 Decadent western mores slap stifling medieval manners around the face and lose. Nothing could have prepared Cass and Eddy for what was to come when they dumped their unwanted pasts at check-in and headed for the oasis. Follow them as they struggle to keep their heads above water (and on their shoulders). An (almost) bloodless coup upsets the expat apple cart of decadent days and raunchy nights, forcing the lotus eaters to hitch up their skirts and scramble for the border. A delicious, laugh-out-loud, randy romp through the myopic and bawdy world of Gulf expatriate life set against the chilling winds of change. 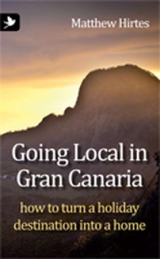 Going Local in Gran Canaria is the definitive guide for visitors and expats alike, covering all aspects of life in this semi-tropical Atlantic semi-paradise. The book is packed to the rafters with well-researched facts and fun, sites and scenes, eats and treats, must-dos and don’t-dos, both on and off the well-beaten track. The entire package is delivered in a witty and erudite style from someone in the know, as is to be expected from a seasoned journalist of Matthew Hirtes’ calibre. Amusing anecdotes weave through the book. I particularly like the notion that nasty General Franco exiled gay soldiers to the island which may explain Gran Canaria’s perennial appeal to the gay community. I’ve been a regular visitor for over 25 years so maybe there’s some truth in this fanciful tale. Whether dipping in for a hint or two or reading cover-to-cover, this book should be in everyone’s Canarian suitcase. 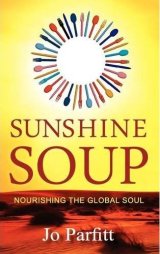 I found it impossible not to be drawn in to this book. The characters are strikingly drawn and developed, the plot is compelling and the sights and sounds of Dubai form an evocative backdrop to a hugely enjoyable story of loss, intrigue and redemption. I found the story of Maya (the book’s main character) very believable and for me that makes this novel appealing. And yes, there is an actual recipe for Sunshine Soup at the end of the book, along with 19 others – a nice touch. 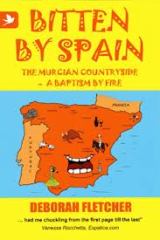 I was bitten by ‘Bitten by Spain.’ Once in a while you read a book that makes you laugh out loud. I loved it. The author moved from her ever so sensible existence in the UK to build a new life in Spain and she describes her adventures, warts and all, with an amusing, easy-to-read style. The fact that her dogs, cat and parrots joined the fray added some real pathos and when the menagerie is augmented by an assortment of wild birds, feral animals and creepy-crawlies the final mix is hilarious. I was struck by Deborah’s pluck (she was often alone because her husband was often back in the UK working) and there are some tender and thought-provoking moments along with the humour.  It really is a lovely read and the kind of book you can dip in and out of (the chapters are a bit like bite-sized set pieces). I actually read it in one long sitting accompanied by a good bottle of Rioja. 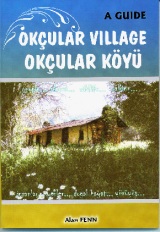 Last but not least…

‘Okçular Village – a Guide’ and ‘Backways & Trackways.’ I whole-heartedly recommend these books because income from sales is spent on environmental and community projects in the village of Okçular, near Dalyan in Turkey. 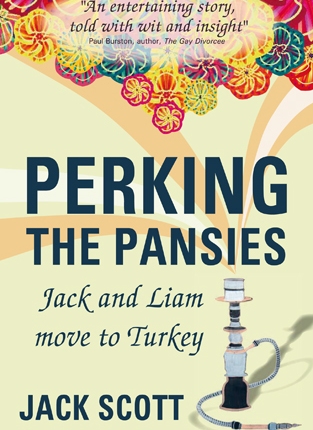 You could knock me over with a feather boa. Fifteen months after Perking the Pansies, Jack and Liam move to Turkey first hit the shelves, it’s back at the top of the Amazon UK charts. To be number one in LGBT Travel is fabulous. To be in the top twenty for all travel books about Turkey is remarkable (in the company of titles from the Rough Guide, Lonely Planet and Marco Polo). I’ve now had more chart re-entries than Elvis and I’m chuffed. Thank you.

It’s great to see that the latest Amazon ad for the new Kindle Paperwhite is LGBT inclusive. Now all Amazon has to do is pay fair taxes in the countries in which it trades (oh, and not keep me waiting until I reach a threshold of sales from Amazon.com before sending me a cheque in dollars that I have to pay a fat fee to cash). After all, someone has to pay for the roads used by their delivery vans and the health and education of their employees. I could go on but you get my drift.