British weather is famed for being predictably unpredictable – rain one minute, sunshine the next, with the mercury up and down like a fiddler’s elbow. The poor Met Office struggles to keep pace with an ever-shifting forecast. It’s no wonder the weather is Britain’s favourite topic of conversation – that and the footie (but best not go there). But so far this summer the weather has been predictably wet, windy and miserable even here in the driest county in the land (usually). A few warm days and a couple of BBQs in early June does not a summer make.

We may sit around the house in shorts trying to pretend it’s summer but who has the heating on in July? We do, that’s who. As more benevolent foreign climes are off the agenda this year for obvious reasons, we try to make do with what old Ma Nature chucks at us but please, old girl, stop pissing on our parade.

Every cloud, as they say. The damp and dismal weather has at least provided a bumper crop all around us, particularly now it’s become de rigueur to let the grass grow to encourage wildflowers, bees and other pollinating insects. And the ducks quite like it too.

We had the partridge. Now all we needed was the pear tree. At least that’s what I thought until Liam pointed out that the big fat bird wandering around our small garden to feed with the bully-boy crows was, in fact, a pheasant. Not as colourful as our usual pleasant pheasant with its red, gold and blue livery, but a pheasant all the same.

I’m told that pheasants aren’t the sharpest beaks in the aviary. I had this one practically eating out of my hand. A very friendly pheasant it was. Friendly enough to hop straight into the pot if I’d asked nicely. Friendly but dumb. 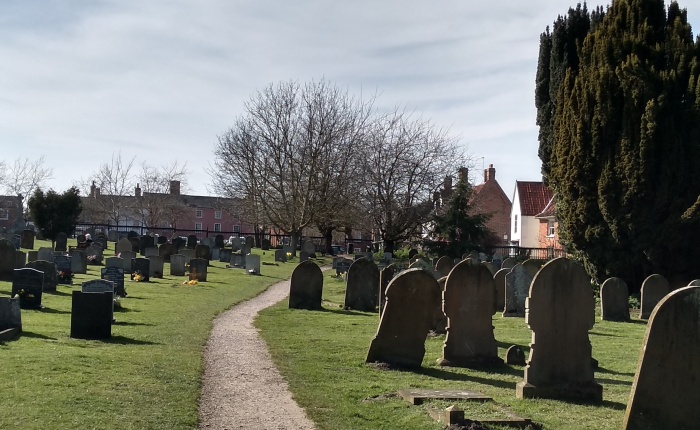 Fleeting spring warmth, the partial easing of lockdown and the Easter break brought villagers, young and old, out onto the streets to make the most of the fine weather. And we were no exception. Downing tools for the day, we trotted off to Pyes Mill for a spot of lunch by the sparkling waters of the River Chet. The most direct route to the waterside clearing is across a boggy field which the owner has since barred after (allegedly) irresponsible dog walkers allowed Fido and Rover to trouble his cows. These are the same cows who troubled us the first time we ventured across his field forcing us to run for our lives. Just saying.

So we took the circuitous route via graves ancient and fresh, a tunnel of wild foliage, a babbling brook and a couple of country lanes. Pyes Mill was less busy than expected, though there was a swan having a good lick (and who wouldn’t if they could?), a few young families mucking about on the grass and a gang of naughty lads sharing a spliff. Liam can smell a joint at twenty paces.

We found a bench among the molehills and unpacked our picnic. When I say picnic, it was a meal deal from the Co-op. After months under house arrest, alcohol was first on the menu. Drink was drunk but rather too quickly. We regretted not picking up a second bottle when we had the chance. Lesson learned for next time.

I’ve always said that if I was a stick of Brighton rock, you’d find the words ‘city boy’ stamped all the way though me. And if, as a city boy living in the city, I’d heard gunshot, I’d have called the old bill, no hesitation. The truth is, despite the crime and the grime on the mean streets of old London town, I never heard gunfire for real, not once. Now I’m in the middle of huntin’, shootin’, fishin’ country where men are men and birds are nervous, I’m slowly learning to embrace the back of beyond. When I hear both barrels go off in the mean fields of Norfolk, I just shrug my shoulders and chuck another log on the wood burner. Pity the poor pheasants, though.

The wettest October since the Great Flood finally gave way to crisp brightness, and so to prevent the second lockdown becoming more of a lock-in, Liam pushed me out of the front door for a Sunday morning constitutional. We ventured along the Wherryman’s Way to the River Chet, past booted dog-walkers, a catch of socially distanced anglers waving their tackle about and one or two boaters disturbing the still waters.

Under the current lockdown restrictions recreational fishing is okay as it’s reckoned to be good for mental health – though the hapless fish might not agree – but taking a boat out for a spin is a bit of a grey area. It could be classed as non-essential travel but the guidance is none too clear.

We made it as far as Hardley Flood (which hardly floods, as a bit of a wit wrote on Faceache), a tidal lagoon and nature reserve which, on the day, was home to a regatta of swans. By then, though, our passage was thwarted by ever-deepening muddy puddles and we could go no further. In more normal times, we might then have headed to the local for a few sherries and a Sunday roast. Sadly, that honourable tradition has been postponed until our next independence day.