Liam’s busted ribs are mending slowly but surely and the pain has eased. At one point, I was considering putting him on the liquid morphine left over from my arterial bypass a few years back, but it’s well past its ‘use by date’ and I didn’t want Liam to go from crack to smack. A casualty of his temporary incapacity was a planned jolly to North Yorkshire. Since Liam could neither travel nor drink, our merry night in Leeds followed by a little festive fun in Knaresborough was off. My disappointment was partially redeemed by a recent five star Amazon review for that book I wrote seven years ago. Amazingly, it still sells, though less so these days. The reviewer simply wrote:

Thank you, Susan Pritchard. Have a fabulous Christmas.

Waterstone’s is the UK’s second biggest bricks and mortar bookseller (after the ubiquitous WH Smith’s) and its stores are great places to shelter from the rain and thumb through a title or two. I would hate to see them disappear from the high street just because of the relentless march of the on-line retailer. ‘If you can’t beat them, join them,’ may be a well-worn adage but it made perfect commercial sense for Waterstone’s to launch its own on-line offer a few years ago.

Much has been said about the phenomenal growth of Amazon and its sharp practices, not to mention its questionable (but quite legal) tax avoidance shenanigans. But you can’t fault their business acumen. If you view an out of stock item, you get this message:

Temporarily out of stock, order now and we’ll deliver when available

Contrast this with the message from Waterstone’s:

Not in our warehouse. We can order it, but could take up to 3 weeks

Turkey Street is an ancient road ‘… just wide enough for two emaciated camels to pass each other unhindered’. Now you can take a stroll along its winding path following in the strappy sandals of Alexander the Great as he tried (and nearly failed) to ‘…wrest old Halicarnassus from the doughty Persians’. But be wary of the ‘…motorcades of Nissan tanks flanked by Vespas on amphetamines’, something Alexander never had to contend with. Turkey Street is now open for business. Relax, open a bottle, kick off your heels and maybe grab the Kleenex.

The real strength of Turkey Street though is that at its heart is a genuinely touching love story.

Greetings from a wet, blowy Norwich. Oh, to be in Bodrum once again. Nevertheless, Liam and I will be popping open the bubbly later to celebrate. This one’s been a bit of a labour of love. Thank you so much for all the pre-orders and messages of support. I’m chuffed.

With thanks to Annie from Back to Bodrum for the photo.

Three days before the official publication of Turkey Street, the pre-released Kindle edition hit the top spot on Amazon in Middle Eastern Travel (as well as No 2 in LGBT Bios and No 5 in Turkey Travel Books – above more illustrious titles from Eye Witness, Rough Guide and even Orhan Pamuk). And that’s not all, the book’s already received two totally un-staged five star reviews. Blimey! 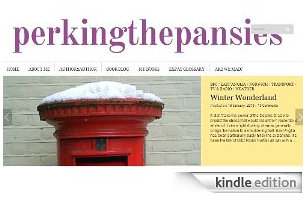 I received an out-of-the-blue windfall from Amazon when a cheque for £17.91 landed on the mat. It wasn’t immediately obvious from the statement what the money was for. After a lengthy head scratch, the penny finally dropped. It was a royalty payment for blog subscribers. Back in the day when Perking the Pansies first set our little emigrey world alight, I signed up for Kindle Blogs (along with everything else at the time), enabling readers to pay a small monthly fee to get Perking the Pansies delivered automatically to a Kindle. Why anyone would pay to read sometime they could get for free over the internet was beyond me but I signed up anyway and then forgot about it. Until now, that is. According to the mighty Amazon, I have one solitary subscriber. So, whoever you are, I thank you. You made my day.

Summertime Publishing has reduced the Kindle edition of five of its most popular titles to $3.99 (Amazon.com) and £2.99 (Amazon.co.uk) during December only. This represents a saving of between 25% and 50% on the list price (depending on the title). It’s a great chance to pick up a selected number of Summertime’s best e-Books in time for Christmas.

I try hard not to over-promote my books here on my personal blog. I reckon that most readers have either bought the bloody things or aren’t going to. But today I can’t help myself. Just when I begin to think that Perking the Pansies is reaching the end of its shelf life, I get bowled over by the reviews added to Amazon. In the last week I’ve received two new five star reviews. I quote:

“A big thank you to Jack Scott for making me smile on virtually every page.” More…

“Jack Scott’s prose frolics along exposing with defining brilliance ‘the sorts’ we all meet and want to avoid with every fiber in our bodies whilst abroad.” More…

So it seems the book’s still got legs. I’m chuffed. Thank you.