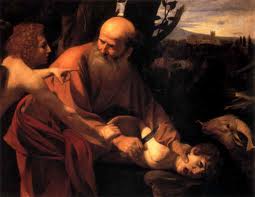 It is Kurban Bayram (festival of sacrifice) resulting in the mass slaughter of hapless sheep right across the entire Moslem World. The blood-letting commemorates the Old Testament parable when Abraham heard the voice of God commanding him to murder his son Isaac, a rather extreme test of devotion. Just as Abraham was about to slash the poor boy’s throat, a ram ambled by. Abraham took this to be divine intervention and sacrificed the ram instead. It occurs to me that, in this more secular age, anyone trying that now would be sectioned and hauled off to a secure unit for the delusional.

Nowadays, sheep are dressed up in drag before being dispatched by the head of the family with a sharp blade to the throat. I’m told that the slaughter of any animal by the unlicensed is illegal so it’s done on the sly in back yards and dark alleys. Given the significance of the ritual, the authorities turn a blind eye. Once butchered, the proceeds are distributed among family, friends and the deserving poor. Tariq the Toothless Caretaker came to the door and proudly presented us with a bag of bloody bones. It was a touching gesture but confirms that we are well down the pecking order just below vagrants and unmarried mothers.

2 thoughts on “Anyone for Spare Ribs?”