I’m sure I’ve been here before.

So said my mother after she took a sip of her brandy and coke and looked around the large smoke-filled room. It was 1980 and I was stepping out with Bernie, a salesman from Somerset. We were treating my mother to a night of slap, sequins and perversion at the Royal Vauxhall Tavern, South London’s premier drag pub. As it turned out, her feelings of déjà vu were spot on. In the Swinging Sixties, she and my soldier dad had slipped out from the barracks on the other side of the river to catch an act or two.

Bernie was a close friend of Pat, the jovial landlord. Against all the odds, bent-as-a-nine-bob-note Bernie and straight-as-a-die Pat had consummated their bromance at the horses, shelling out a king’s ransom at the Cheltenham Gold Cup every year.

Pat was Irish. Digging roads or running pubs were the standard professions for the Irish back in the day. Just a few months before, Pat had been the manager of the Colherne, the grand old queen of gay bars in West London.  But Pat had ambitions to rise above the ranks and saved his pennies. When the tenancy of the Royal Vauxhall Tavern came up, he grabbed it with both hands, moved in his wife and kids and spent a small fortune reconfiguring the original three bars into one large single space. It was a masterstroke that saw the till ka-chinging for years. 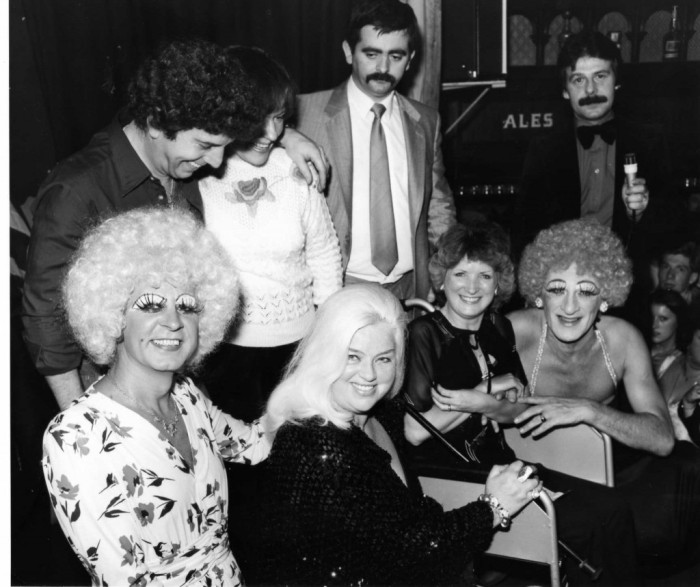 Charity night at the Royal Vauxhall Tavern with the late Diana Dors flanked by the Trollettes. That’s Pat the landlord (top row, third from the left. Next to him in the bow tie is someone everyone knew as Terry ‘Allcock’ – can’t think why we called him that.

Image courtesy of the RVT Community.

Time marched on, of course. Pat and his missus retired back to Ireland many moons ago and, sadly, I lost touch with Bernie in about 2006.  The Royal Vauxhall Tavern, however, continued to thrive, standing firm against the constantly changing rainbow landscape as a venue for drag and alternative cabaret.  Arguably, the venue’s most famous turn was Lily Savage, Paul O’Grady’s theatrical alter-ego before he hung up the blond wig and became every housewife’s favourite. 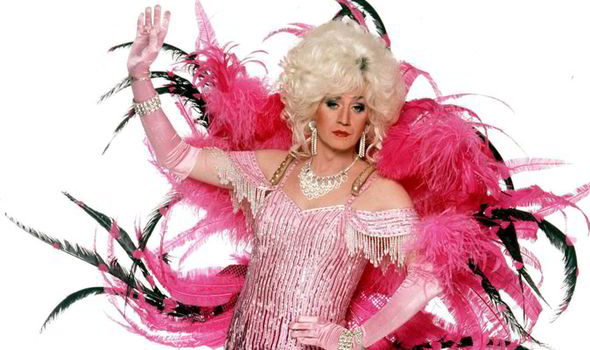 And then the iconic building was bought by an Austrian property development company. There’s a vast building boom going on in Vauxhall and Battersea these days, with a tube line extension, the redevelopment of Nine Elms, Battersea Power Station and a new state of the art American embassy. The future of the pub was looking bleak. That was until some punters swung into action and applied for listed building status. And guess what? They got it. Historic England (the organisation responsible for such things) decided…

It’s the first time any building has been listed on this basis. While the new status protects the building for posterity, it doesn’t mean that the venue will survive in its present form but it’s a start, a great start.

Jack Scott Imagine the absurdity of two openly gay, married, middle aged, middle class men escaping the liberal sanctuary of anonymous London to relocate to a Muslim country. I chronicled our exploits with the mad, the bad, the sad and the glad in a blog for the whole world to ignore. Then came the book which became a critically acclaimed best seller. Its success opened out a whole new career for me, firstly as an author, and now as a publisher. Who'd have thought it? Certainly not me. In June 2012, we ended our Anatolian affair and paddled back to Britain on the evening tide, washing up in Norwich, a surprising city in eastern England, then to the wilds of Norfolk as the only gays in the village. I’m sometimes nostalgic for our encounters with the hopeless, the hapless and, yes, the happy go lucky. They gave me an unexpected tale to tell and for this I thank them.
Published 21 September, 201521 September, 2015