Anyone living on these damp little islands and anyone who visits them knows that Britain is a nation of a thousand and one accents and dialects. Homespun and imported lingo twists and turns through town and county. We may live in a global village and in a mass media world where ‘Globalish’ (the cut-down version of English-light) dominates, but that hasn’t stopped many regional accents kicking against the tide. In many cases, they are thriving. English in all its variants is constantly evolving and because the language is such a magpie, words are being dropped and added, borrowed and adapted, created and extended all the time. Our cousins across the Pond might be forgiven for thinking that there are only two English accents: posh and Cockney. But even those stereotypes are changing. These days, only the Queen speaks like the Queen and the word on the street, the inner city London street, is a marvellous infusion of words, phrases and pronunciations from right across the world. Quite different from an Eastenders episode.

Unfortunately, many English dialects are truly indecipherable to an untrained ear. Pity the poor foreigner, jumping into a cab at East Midlands International Airport to be greeted by:

The thick Norfolk accent, aptly named “Broad Norfolk” is no less difficult to fathom and notoriously difficult to imitate. Norwich may only be 115 miles from central London but that’s far enough away for Broad Norfolk to survive the onslaught of the insipid Estuary English, the dominant accent of southeast England (and the one Liam and I speak). There’s even an organisation, the Friends of Norfolk Dialect (FOND) which is…

Broad Naarfuk is rich in local words and phrases, some of them variants on standard English, others completely unique. A year in and Liam and I are only just beginning to look a little less baffled. Here’s a few to give you a titty-totty taste: 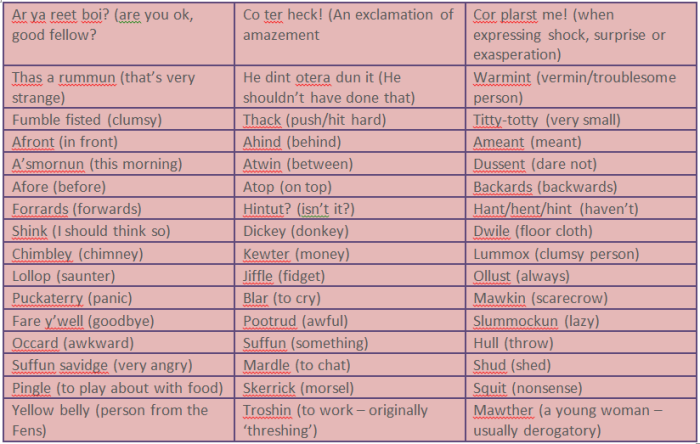 Want to know how all of this sounds? Take a look at this. I’ll be testing you later.