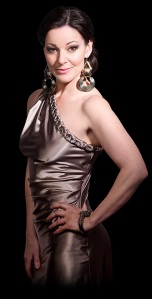 Ruthie Henshall, star of the West End, Broadway and Celebrity Family Fortunes, was in town performing her one woman gig at the Norwich Playhouse. Liam was first in the queue for tickets. Olivier award-winning Ruthie went down like mulled wine on a chilly night and belted out the old show tunes to an appreciative audience of old queens and old codgers. Ruthie’s tender rendition of “I Dreamed a Dream” from “Les Mis” (Ruthie played the role of tragic Fantine on stage in 1992) made for an interesting comparison with Anne Hathaway’s epic interpretation in the film version of the Glums currently doing the rounds. Ruthie didn’t disappoint.

The likeable Ms Henshaw punctuated the show with intimate tales and titbits from her chequered past. The slightly nervous repartee contrasted with a confident despatch of her back catalogue and the overall effect was rather endearing. I left the auditorium thinking that this was a girl I could have a drink with. Liam left the auditorium in love with yet another chanteuse.

I have my own romantic association with “I Dream a Dream.” Many moons ago in a gay bar on the Fulham Road, it was sung to me by a fat drag queen called ‘Dockyard Doris.’ Dearly departed Doris had a huge voice and carried off the key change with music hall assurance. The song was requested by a gas fitter (I was cleaning out his pipes at the time). He thought I was the one. I had other ideas.

7 thoughts on “An Intimate Evening with Ruthie Henshall”