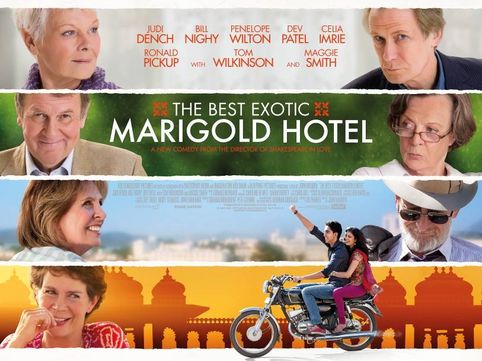 I wanted to see ‘The Best Exotic Marigold Hotel’ when it was released in 2012. It’s my kind of film but not the kind that got a screening at the plush cinema in Bodrum which tended to focus on Hollywood blockbusters, more’s the pity. We could have lifted a dodgy download from the enterprising Low Countries couple who did a roaring trade in counterfeit DVDs for the emigreys but I’m rather anti the whole it’s-not-really-stealing thing. Actually, it is. So, I was resigned to stalking the bargain bucket to acquire a proper copy at a knock-down rather than a knock-off price. My patience was rewarded and we picked up the film for a song at our local Norwich HMV store.

We uncorked the wine, turned off the lights and put our feet up. It was well worth the long wait. The tall tale is about a disparate group of cash-strapped Brits who up sticks, drop off their excess baggage at check-in and travel to the sun to eke out a low-cost dotage in an emigrey enclave (in this case, a run-down retirement hotel in India). Sounds strangely familiar and not so tall after all. The funny and tender script, heaving with sharp one-liners and set against the glorious chaos of the sub-continent, is delivered with expert thespian timing by the outstanding cast (including that pair of incomparable old Dames – Judi and Maggie). I didn’t want it to end

Let Dame Judi tell it as it is:

“There’s no past that we can bring back by longing for it, only a present that builds and creates itself as the past withdraws.”

Did the old wrinklies heed the advice and find redemption and contentment? Do any of us? Now, that would be telling.