The Bells, The Bells 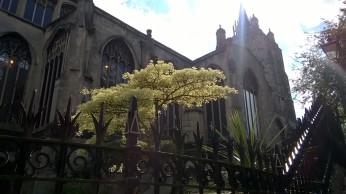 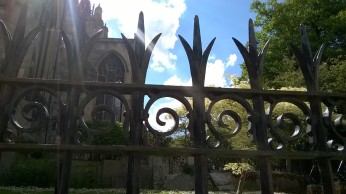 With Liam away in London on family duties, I was left to my own devices to troll the streets of Norwich. As I passed the rear of St Peter Mancroft, a divine shaft of light pierced the clouds and a sudden crescendo of bells rang out. Blimey. It was almost enough to make this sinner drop to his pagan knees. I resisted Peter’s temptation, it’s not something I tend to do in broad daylight (not even when the better half is away in the Smoke).

St Peter Mancroft is the largest church in Norwich after the two cathedrals. A ring of fourteen Whitechapel bells clanging high in its lofty belfry makes quite a heavenly racket, I can tell you. As it turns out, it wasn’t the Almighty calling, just a practice peel for the National 12-Bell Striking Contest Final.

Who was St Peter Mancroft? No one. The Mancroft bit is thought to be a mangling of the Old English gemaene croft, meaning a common field. Nobody knows for sure. Fancy.

Jack Scott Imagine the absurdity of two openly gay, married, middle aged, middle class men escaping the liberal sanctuary of anonymous London to relocate to a Muslim country. I chronicled our exploits with the mad, the bad, the sad and the glad in a blog for the whole world to ignore. Then came the book which became a critically acclaimed best seller. Its success opened out a whole new career for me, firstly as an author, and now as a publisher. Who'd have thought it? Certainly not me. In June 2012, we ended our Anatolian affair and paddled back to Britain on the evening tide, washing up in Norwich, a surprising city in eastern England, then to the wilds of Norfolk as the only gays in the village. I’m sometimes nostalgic for our encounters with the hopeless, the hapless and, yes, the happy go lucky. They gave me an unexpected tale to tell and for this I thank them.
Published 22 June, 201523 July, 2015

8 thoughts on “The Bells, The Bells”