When in Greece go to Albania

It’s only three miles from Corfu at its closest point so it would be rude not to. We sailed the hydrofoil from Corfu Town and here we are sipping a cappuccino at a smart restaurant in Sarandë, a port and resort on the Albanian Riviera – yes, they’ve got a riviera. We’re on a coach trip with a herd of Saga louts – Brits and Germans mainly. We had neither the wit nor the inclination to organise the tour independently. Albanian’s call their country Republika e Shqipërisë. No, I can’t pronounce it either so let’s just stick with Albania. 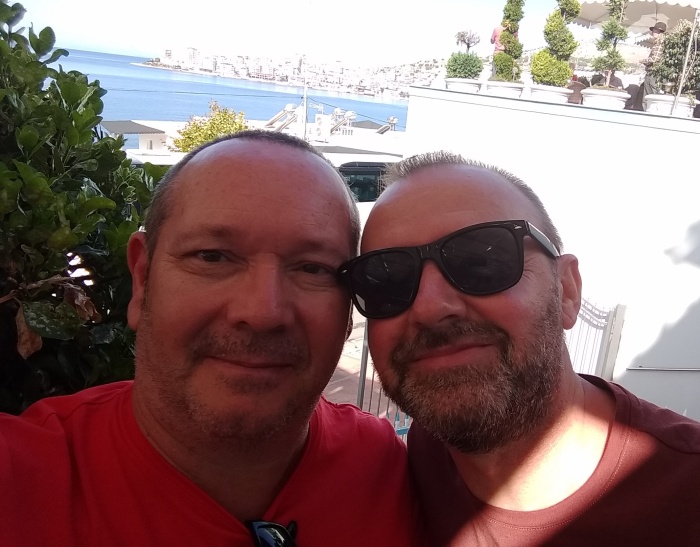 Our first excursion is to the ancient city of Butrint – Roman Buthrotum back in the day and a UNESCO World Heritage Site. After years in Turkey, I tend to be a bit blasé about old cities – Turkey’s got ‘em by the quarry-load. But I have to admit the site is pretty impressive with its Greek, Roman, Byzantine, Venetian and Ottoman remains. And the setting on the edge of a lagoon is magical. According to Greek mythology, the city was founded by exiles from Troy. A fanciful tale? Maybe not. 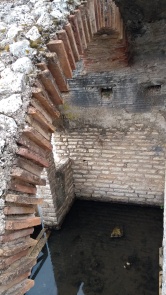 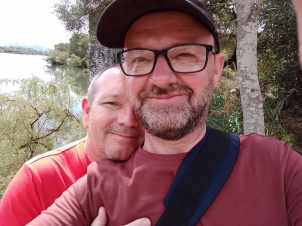 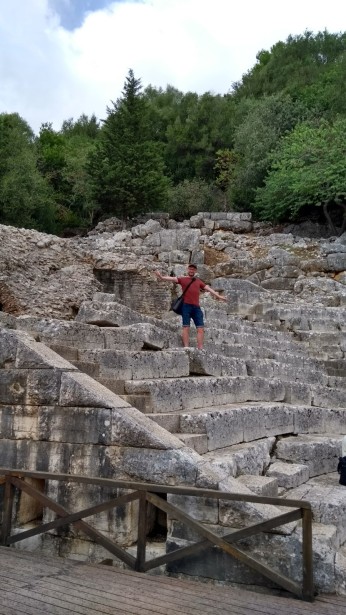 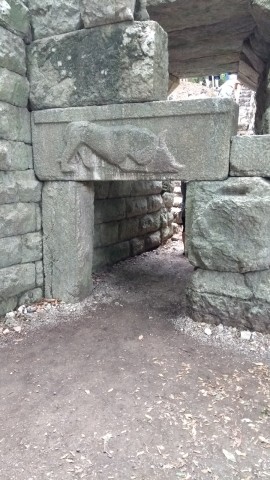 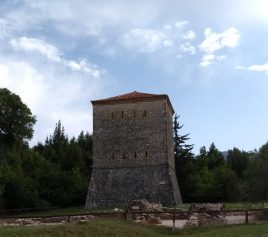 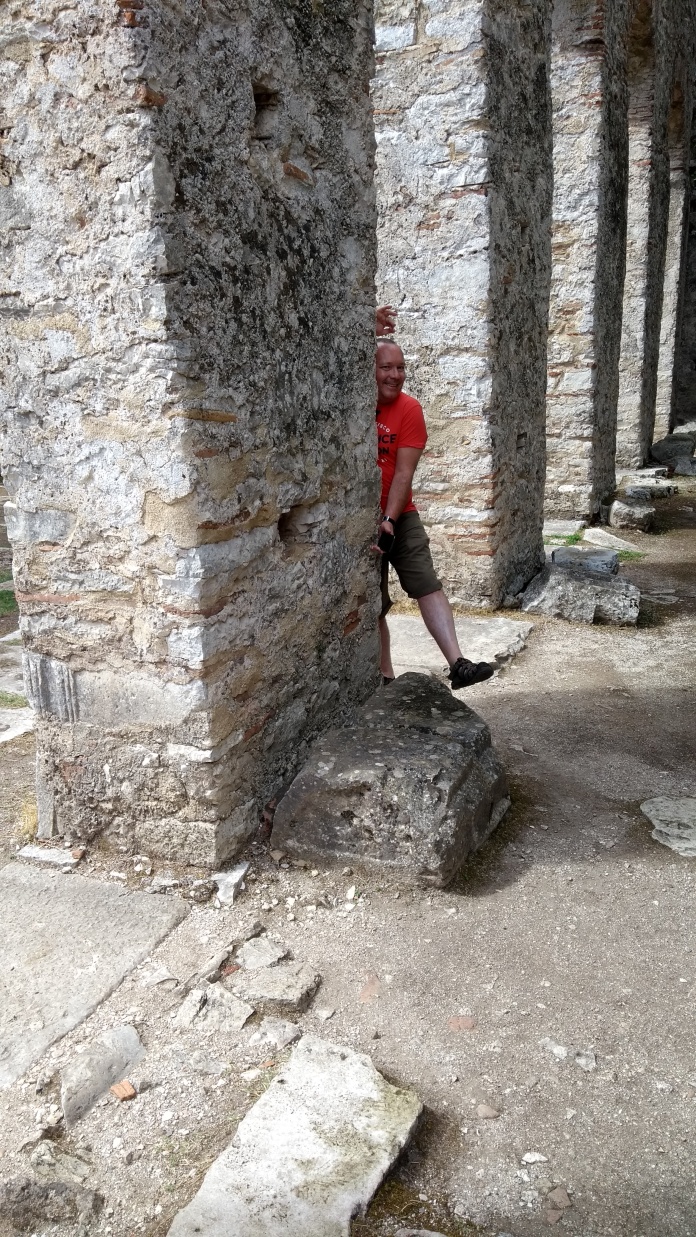 We’ve meandered through a mozzie-infested thicket and over long-buried streets to various ruins in various stages of ruination, including a Byzantine basilica – reputedly the largest in the world after Hagia Sophia in old Constantinople. While imposing, I didn’t think it was that big but what do I know? 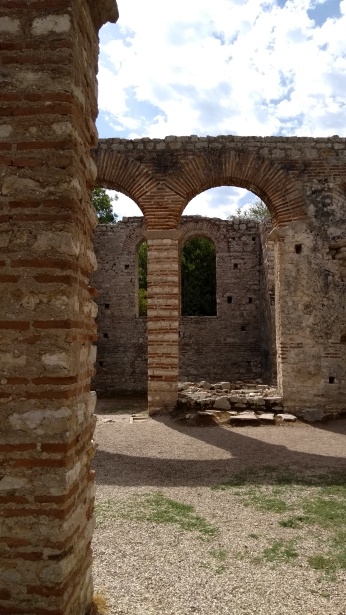 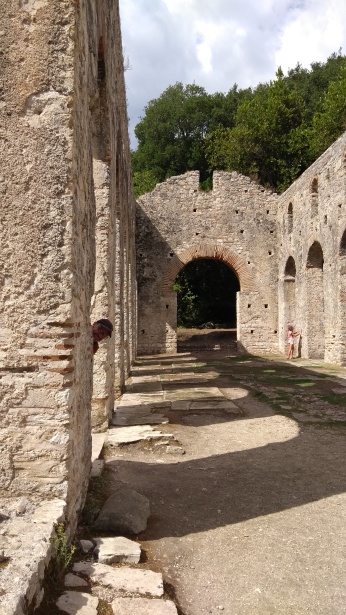 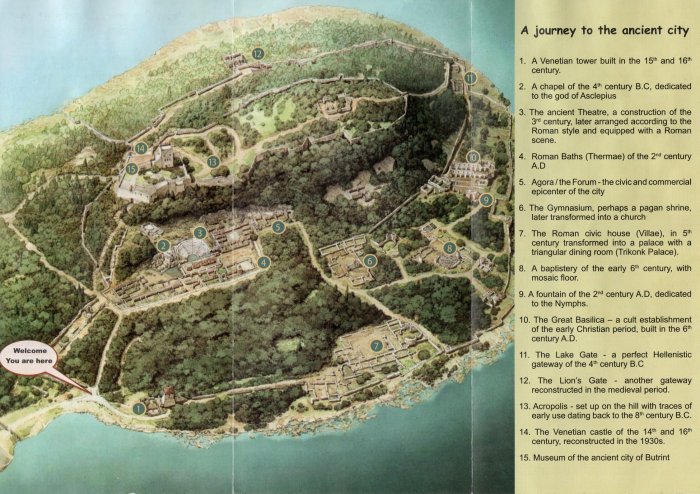 As we rambled, I Googled ‘Butrint’ and happened across the UK Butrint Foundation. Guess where it’s based? Yep, Norwich. Small world.

We’re back in Sarandë for lunch. Many of our fellow passengers would push their firstborn under a bus to get to the buffet first. It’s like feeding time at the zoo. I had to neck an Albanian beer to get over the shock of an ancient Teuton with fat ankles, bum bag and curly perm elbowing me out of the way to get her grubby hands on the köfte.

Our afternoon excursion sped us through the Butrint National Park to the Blue Eye, a spring that bubbles forth from a deep pool. I don’t think I’ve ever seen waters so clear or iridescent. The images here are for real – no filters required. 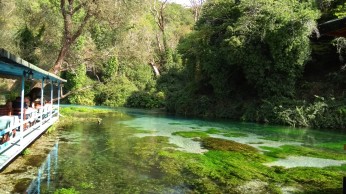 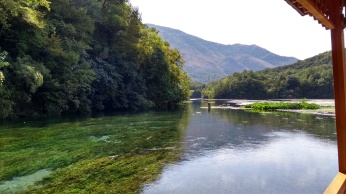 We have an hour or so to kill before our hydrofoil back to Corfu Town. Liam’s sniffed out a swish harbourside bar, with prices to match. I’m sipping Kosovar wine. I didn’t know they made wine in Kosovo. Sarandë is a handsome town – more modern than I was expecting but then I don’t really know what I was expecting. Actually, I’ve never visited an ex-‘Communist’ state before. I’ve been to yer actual Commie country – when I took the train 1,500 or so miles from London to Moscow during Brezhnev’s reign. And then there was Romania when Ceaușescu was on the throne. Both experiences were broadening but those eras are long gone. Albania is beautiful but it’s developing fast. There are mouths to feed and aspirations to fulfil. I just hope they don’t lose too much in the mad rush to be just like everyone else.

I’m guessing not many people know much about Albania. I certainly didn’t. But I know a little more now, courtesy of our guide, a splendid young man who speaks great English, and great German too by the sound of it. Throughout the day, he’s been giving us a potted history in bite-size episodes. He even mentioned the German occupation during the Second World War, something  I thought he might have skipped to avoid offence. It was done in such a matter-of-fact way, I’m sure no one was offended. Our young guide is looking to the future, not dwelling on the past. I’m rather taken with him (not in that way – get your minds out of the gutter). He ended the lesson by saying simply,

He got a round of applause – and a tip. 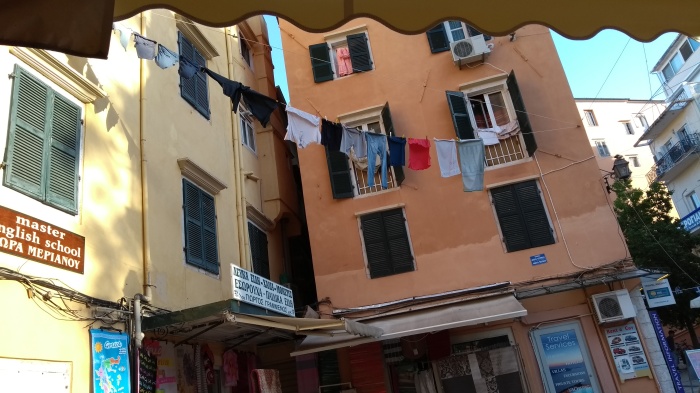 Jack Scott Imagine the absurdity of two openly gay, married, middle aged, middle class men escaping the liberal sanctuary of anonymous London to relocate to a Muslim country. I chronicled our exploits with the mad, the bad, the sad and the glad in a blog for the whole world to ignore. Then came the book which became a critically acclaimed best seller. Its success opened out a whole new career for me, firstly as an author, and now as a publisher. Who'd have thought it? Certainly not me. In June 2012, we ended our Anatolian affair and paddled back to Britain on the evening tide, washing up in Norwich, a surprising city in eastern England, then to the wilds of Norfolk as the only gays in the village. I’m sometimes nostalgic for our encounters with the hopeless, the hapless and, yes, the happy go lucky. They gave me an unexpected tale to tell and for this I thank them.
Published 8 October, 201722 September, 2018

13 thoughts on “Postcards from Albania”