Beverages are big business these days and popping out for a cuppa has become something of a ritual in the Brennan-Scott household. We like to support local traders over the big chains and we’ve sampled most of the venues dotted about the city. Our favourite indie café is Stranger’s Coffee House on Pottergate but it’s a small shop and getting a table is almost impossible during the weekend rush. So we decided to give the shabby chic ambience of Biddy’s Tea Room on Lower Goat Lane a go. Cluttered vintage is Biddy’s thing. The place is packed wall-to-wall with curios and bric-a-brac from times past. A nightmare to dust, I should imagine. Even though the place was also packed wall-to-wall with punters, we found ourselves in pole position for a vacant Chesterfield. Liam hovered while I enquired after the dishes of the day. The young biddy with the long face behind the counter was not exactly forthcoming. ‘They’re all labelled,’ she barked. They weren’t. 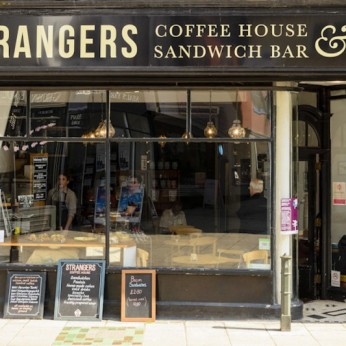 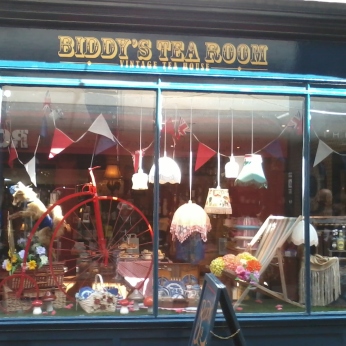 Give Us a Quiche

While I ordered the veggie quiche and Liam paid, a couple sneaked in behind us and nabbed the sofa. Out-flanked, we ended up balancing our lunch precariously on our knees as we sat upright on a lumpy old chaise longue that looked like it had been dragged out of a skip. No easy task for a couple of old biddies like us. The quiche was nice enough but rather spoiled by the side salad swimming in Balsamic vinegar. Liam doesn’t like Balsamic vinegar.

And who were the couple who beat us to the Chesterfield? None other than Chloe Smith, Conservative Member of Parliament for Norwich North, and her beau. Ms Smith is one of the new breed of socially liberal Tories. She supported the same-sex marriage bill. Thank you, Chloe, but what about the bedroom tax and food banks? So far, Ms Smith’s greatest claim to fame is being mauled by veteran broadcaster, Jeremy Paxman, on Newsnight, the BBC’s flagship current affairs programme. The moral of this story? Grab your seat before you order at Biddy’s Tea Room and make sure you do your homework to avoid a right royal stuffing by Paxo (now there’s a disturbing thought).